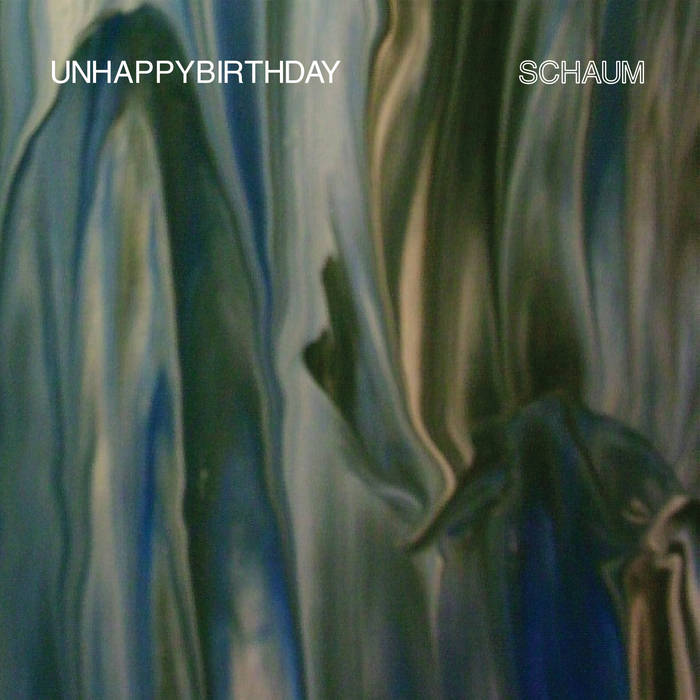 A new album every three years, a new cycle. An unusually prolific rate of output for a band as young as unhappybirthday, yet wholly in keeping with their anachronistic nature. In contrast to most of their contemporaries in the class of 2010 who took to the stage, the next generation inspired by Beggars Banquet, Factory and ZickZack, the synthesizers and drum machine they borrowed were not tools of sheer irony or approximations of raging rebellion.

The last unhappybirthday album, Schauer, was released in 2015, influenced by Georges Perec's novel "Un Homme Qui Dort", a young man's meditation on melancholy, indifference, inertia. Here, they took the jangly pop of carefree youth and bestowed upon it a degree of earnestness and sincerity; traditional values perhaps, seen through the prism of today. Now, Schaum is the trio's first album to have been created without the aid of a tape recorder. Working closely with Berlin producer Jonas Meyer, their sound has matured, shattering the raw lo-fi veneer of the past to explore complex spaces with unimagined agility and clarity. The dry baritone of Daniel Jahn conjures up images of hazy summer evenings and gosammer rain, evaporating before it touches the hot asphalt surface. Tobias Rutkowski's guitar is a conduit for deep-rooted desire, the like of which has not surfaced since the Cocteau Twins. Diana Kim, who joined on bass in 2017, adds her own kinaesthetic counterpoint to spherical keyboard motifs. If Schaum were a person you had met, you would be enraptured and helpless in equal measure, unable to find words for such magic: Je ne sais quoi.

If the eight new tracks can be attributed to a particular genre, shoegaze comes closest, albeit with a sense of form skilfully distilled from the 1980s; a diaphanous essence found less in concrete, constituent parts and more in the work as a whole.

There is a shimmer of the vitreous elegance once epitomized by David Sylvian – without actually sounding like Japan; an echo of Sade's silky stylishness without for a moment implying that this should be added to a cocktail party playlist. Instead, like the finest traces of perfume, a note here and there sparks recollections, hinting at the playful experimentation of Les Disques du Crepuscule releases.

The result is bradycardic, sophisticated pop, overcast with dreams: music falling like light on mother of pearl, a transient memory of moist, warm skin.

Bandcamp Daily  your guide to the world of Bandcamp